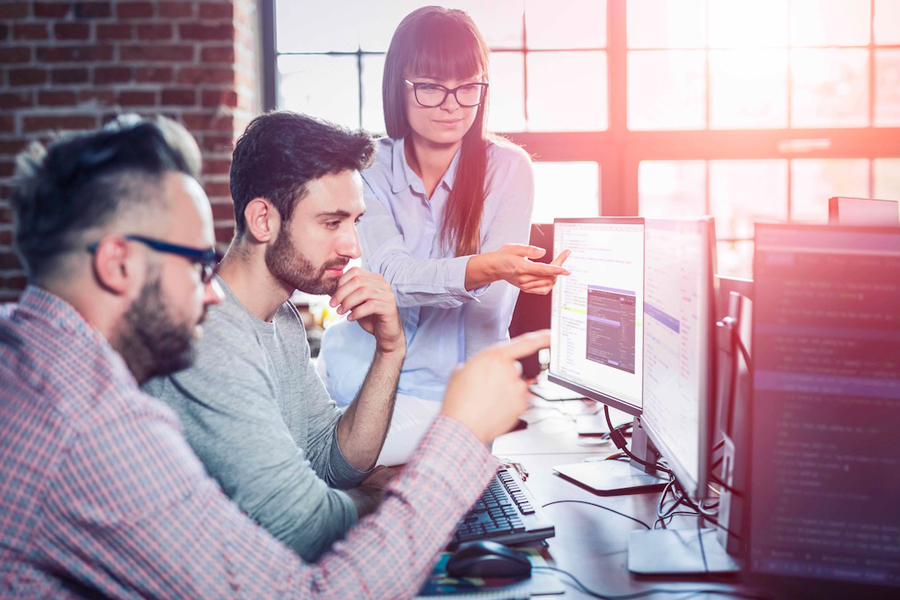 Outsourcing has become one of the most common methods corporations are using to handle a lot of their projects or tasks. Outsourcing means hiring another individual or getting a firm that is exceptionally skilled in doing the task you require them to do. For instance, you can outsource web development projects through a professional IT firm. Outsourcing means that you do not have to hire an entire department to handle a task. All you have to do is sign a contract, pay them and they take care of everything else regarding the project. Whether you are a startup or large organization, outsourcing has many benefits that we have listed below.

It is one of the most obvious benefits of outsourcing web development. Hiring new employees, training them, getting new equipment and other such necessities of doing in-house development can become a strain on your budget. Hiring a software house to take care of your mobile or web application development saves a huge portion of the budget which is especially great for small startups. You can use that money in your business and other aspects that would help your company grow. Outsourcing is a lot cheaper than having to hire full-time employees whom you would have to pay a salary to for years.

Hiring a software house means you give up worrying about every single detail of a project. The agency is responsible for everything and will put their best effort in producing the results you require. The best advantage of hiring a software firm is that they take on every responsibility. That leaves time and effort for you to spend on your business. Not having to worry about every step of the process would allow you to focus on how to progress your business.

The major difference between doing web development in-house or outsourcing it is that your team of developers would have limited knowledge as compared to an IT firm that has years of experience and professional skills. They would also have knowledge of all the latest technology and updates that could take your employees some time to learn. Getting a software house to develop your mobile or web applications would give it a touch of professionalism that your own team could never have. This would make sure your applications are always unique and creative which could benefit your business greatly.

A web developer’s job is not the easiest or most predictable one. They have to keep learning and improving their skills because the world of technology is always upgrading. They have to keep updating their knowledge so that they do not lag behind. In order to keep up with the technology and its updates, developers need to participate in workshops, courses, seminars etc. That means you have to put in extra money and effort which not everybody has. An IT firm is always planning such self-development events which means their developers are always updated.

Managing an in-house team of developers means being ready for unexpected obstacles at any time. One of your developers could get sick, another could have a family emergency to deal with etc. Such setbacks are common and unfortunately can happen without a warning. That is why software houses are your best option. When it comes to hiring an IT agency, it means you are hiring a company not a single person. They sign the contract stating that they would provide you with the end result you desire no matter what. If their developer gets sick or takes leave, it is their problem. Your concern is only to anticipate the product you hired them to make. How they do it, is their concern.

No matter how you try to assemble a great in-house team of developers it still would not be able to compare with the knowledge that a software house’s team has. While their team discusses certain problems or processes, you get to tap into their vast pool of knowledge. Their teams are always big and consist of people who are especially skilled in certain technologies. You get to take advantage of such skills and knowledge at a low price.

IT agencies have pretty straightforward contracts regarding hiring their services. They are definitely easier than handling HR problems and issues regarding an in-house team of employees. In-house developers come with their own management and HR issues that you would not have to worry with when hiring an IT firm. You are only signing them on for their services and nothing else. If at whatever you wish to change things or end the contract you can easily do so without going through any complicated processes such as with in-house employees.

When it comes to hiring new employees, you would only go so far as to hire developers. Hiring an entire team would cost too much and be too much effort. Software houses have large teams consisting of not only developers but every technician and engineer that could help make your application amazing. They have teams of QA, PM, UX designers etc. That means when your application is being developed, it would be handled and checked by professional software engineers who know what it takes to build a flawless application.

When you hire an in-house team of web developers, any risks or disasters regarding the project would need to be handled by you as the responsibility falls on your shoulders being the team leader. That could mean a lot of money and time spent that could’ve been utilized to grow your business instead. Signing a contract with an IT firm entails a legally binding document that makes it their responsibility to handle every risk. Any situation going wrong would be fixed from their end since they have a lot more to lose. They would find solutions to every problem and make sure any problem goes away on their own.

It goes without saying that time is money in the tech world. Every second is precious that could be spent on developing something new and exciting. The time it would take for you to recruit, hire, train and then manage an entire team of web developers would be wasted. The employee could resign at any given moment meaning you would have to go through the process all over again. You could spend that time thinking of new ideas, creating new strategies, networking etc. That is where a software house could come and help.